I guess the whole mess started around my birthday. Amendment: my first birthday. I was born turned around, and apparently was holding my head in my hand in such a way that resulted in twelve treacherous hours of painful labor for my mother to eject me.

My mom said she imagined I was trying to sort out some great philosophical quandary, like Rodin’s Thinker sculpture that she had seen on a trip to Paris in another lifetime. But I think that was just a polite way of saying I looked like I didn’t get it. Born backwards and clueless. In other words, born confused.

So I came out the wrong way. And have been getting it all wrong ever since. I wished there was a way to go back and start over. But as my mother says, you can’t step in the same river twice.

The first ever South Asian American coming-of-age / YA novel (feat. the first LGBTQ+ characters in this realm) turns 15 this year, as does Born Confused and sequel Bombay Blues heroine Dimple Lala.

“‘Flagship’ South Asian Young Adult Novel Born Confused Still Resonates After 15 Years: A decade and a half after it was first released, Born Confused continues to leave a lasting impression on its readers.”

“Fifteen years ago, when I was 26 years old, a YA novel helped me see my life anew. That’s why we read, of course. But this was different; Born Confused was not a book that spoke to my soul as much as told from my soul. That feeling of recognition and insider status (at last!) that popped off virtually every page stays with me to this day—and is one I strive for in my own work as an author and journalist.”

“Set a new standard for storytelling in a multicultural age.”

“Talk about a book that changes your life.”

“Born Confused created a space for writers like me and characters like mine and showed me just how powerful a story can be. How it can save someone.”

“Born Confused opened my eyes to the world of the possible… Without [Desai] Hidier blazing the path forward, I may never have taken that first step on my journey to publication. There simply were no Desi girls in young adult novels. If Jhumpa Lahiri allowed me to see myself, for the first time on the page, Hidier compelled me to find my own voice and make that page my own.”

—Mitali Perkins, You Bring the Distant Near (longlisted for the National Book Award) on her top 5 Indian-American characters, Meet the Authors

“Dimple Lala was the first character who made me want to stay right here, in my own skin.”

“Dimple would be in her thirties now; I’m not quite there yet—but I know that when I do get there, I’ll still be sifting through these pages. My relationship with this book will only continue to grow. How could it not, with language like that, with messages that are—arguably—more relevant now than ever? If I have a daughter, I’ll give her my copy of Born Confused. It’s earmarked. It’s underlined. And it’s deeply loved.”

—Carlie Sorosiak, Why Birds Fly Back

“There are a thousand scenes from Born Confused worth spending an essay on for the fifteenth anniversary of its publication… Tanuja draws out the hilarity in the conflict between the old world and new—because it really is the stuff of comedy—but never loses the poignancy of it.”

—Donna Freitas, The Possibilities of Sainthood

“The significance of Born Confused is less about it being a first as a South Asian coming of age story, but more as a genre-busting novel that insists we can write about identity, coming of age, friendship, romance, sexuality, cultural appropriation in one big, teeming book. Tanuja is at heart a maximalist—she takes all of herself, all of her cosmopolitanism, her musical passions, her poetic love of language—and pours that into the capacious sprawl of a novel. She’s not afraid of the messiness of coming of age. One can’t separate Tanuja from Dimple; her generosity as a person shines through in the prose and the searching, meandering, musical lines of connection.”

“A beacon of awesomeness and a lighthouse for brown girls…We needed a heroine who wasn’t perfect, who didn’t have it all together, who was very American and very Indian and who was giving voice to an ignored demographic. Dimple Lala came through to be real, relatable, funny as hell…and pioneered a South Asian girl being the protagonist in a young adult novel.”

“Born Confused opened the door. The door has remained open ever since. Plenty of other authors and characters have walked through that door. YA literature and the world are better places because of it. Again, not just for readers who got to see themselves in a book for the first time. But also for people like me, who got to learn much more about the lives of friends and other people around him by getting to know Dimple and her family… What’s amazing about Born Confused is how it’s just as alive and wondrous now as it was when it was written. Born Confused didn’t just break ground—it built something long-lasting on that ground. And it’s still, fifteen years later, one of the greatest joys of my editorial life to have seen it being built.”

“Fifteen years after creating our lord and savior, Dimple Lala, Tanuja Desai Hidier is still kicking ass…. I met Dimple Lala when I was about twelve. Now, I am edging towards thirty and she remains a pertinent character in my life, someone who shaped my own. Never did I think that over a decade later, I’d be celebrating her birthday, letting go of the anger that became my identity from adolescence to young adulthood, or become even closer to her by writing about her legacy today.”

a series by writers/authors in celebration of the publication of Tanuja’s landmark novel Born Confused (which in part inspired the creation of Brown Girl Magazine!) 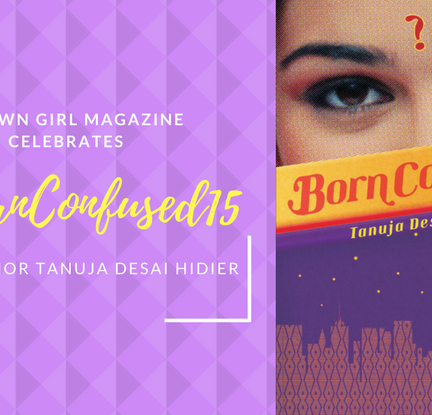 And another cycle/circle completes: Mentions of Born Confused in press on the party – Basement Bhangra – that inspired the party in the book, and recently celebrated it’s 20th anniversary: