A surreal moment from my recent nineteen-day Jaipur/Bombay tour in support of the Bombay Blues book/album India release (same number of days heroine Dimple Lala spends in Bombay in the novel!):

A sankalp that slowly manifest itself into something you can literally hold in your hands.

It was funny in the best possible way seeing heroine Dimple Lala here. After years spent ‘being’ her here: seeing the world through her eyes—and camera.

Although most of those years were spent trying to write her Bombay clear…from London, England: where pretty much all the writing took place.

Although I was in Bombay three times over the course of 2011 and 2012 to research Bombay Blues — and 24/7 in my imagination (and onscreen) until the book and album were finished and released in the USA last August 2014–this Jan/Feb 15 India trip was the first time I’d been back to the mother/fatherland in just about exactly three years.

And the first time back with both projects complete.

To be honest I was a little nervous about returning in a way. Whereas with my first novel Born Confused, writing about NYC, where it’s set and where I’d lived for many years, was like making a record of a lived landscape, interestingly, and fittingly, with Bombay Blues, writing my/Dimple’s Bombay was more an experience of a land-escape:

For in a way the Bombay I was looking for, that I’d been working so hard to find my connection to…slipped my fingers the moment I’d fully written about it.

Or, rather, the Bombay I was looking for…turned out to be the Bombay in my book—returning that metropolis to being a mythical city, a city of memory. From mapping to unmapping. Which brought me full circle back to the very point I’d started from: when I’d embarked on this writing journey in part to make this myth ‘real’.

A part of me worried about going back and not finding that constantly challenging, creatively rewarding muse in this metropolis—the muse I’d lived, loved, and wrestled with these last three to four years. Because though the lows were low—the highs were high: The intensity of the creative process was addictive.

When I landed in Bombay this January, I realized that this was the first time in my entire life I’d ever gone to India not seeking something (usually a sense of home, connection…or at least a SIM card).

And, turned out, it was…a relief!

I guess as Dimple discovers many times in Bombay Blues, you can never know how you’re going to feel about something, somewhere until you’re in it.

It was pretty much hit the ground running once I landed, with eight events in two cities (actually, there were meant to be eleven events but I completely lost my voice and had to cancel three talks). The Zee/Jaipur Literature Festival book and music events (and getting some lovely QT with my panel moderator, author Monisha Rajesh, Bombay Spleen-mate/accompanist for the music stage Gaurav Vaz, and Jeet Thayil and his Still Dirty bandmates who I joined for a couple songs as well). Visiting schools with some lovely inquisitive and inspiring students. The absolute blast of the official book/album release party at Café Zoe in Lower Parel (which began at 530 in the afternoon….and went til 1? 2 ? am?)—organized by Sweety Kapoor, with Naresh Fernandes moderating a really enjoyable panel where he and street artist/muralist Jas Charanjiva and music journalist Kenneth Lobo and I talked culture, cities, home, identity, followed by our own music set, and DJ Uri’s 3Stylers, and LoboCop (Ken’s DJ avatar). It was a buzzy lovey dancecrazy slew of a crew of not only India-based folk warming up that room, but even people I know from London, NYC…and, by chance (he was there on a business trip), even Paris!

How special it was to celebrate the release of the book and album…in the very city that inspired both.

And then there was this moment of walking into Crosswords… and nearly literally into heroine Dimple Lala herself!

A moment to say grace. 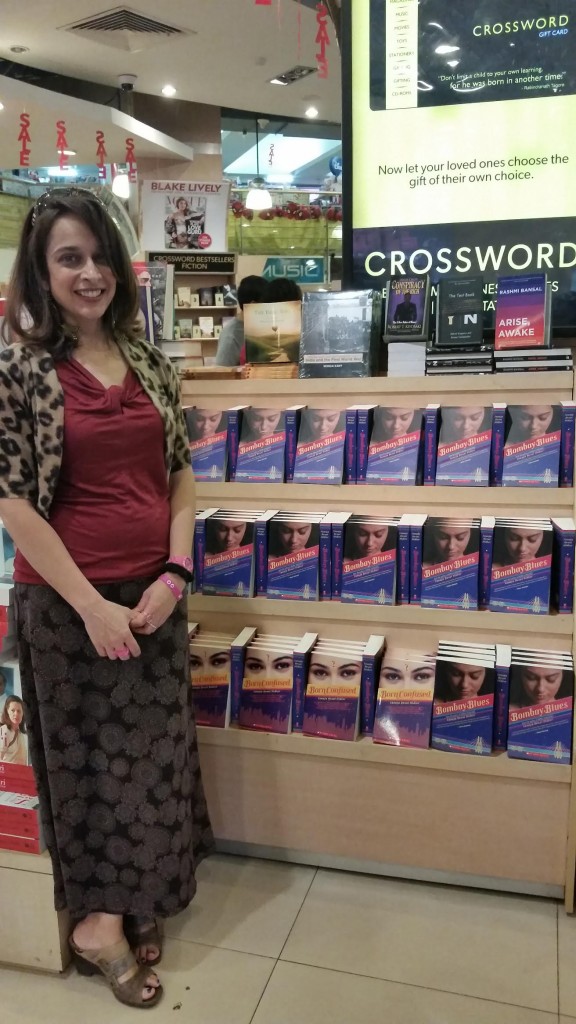 As I crossed the Sea Link Bridge with my Scholastic teammate Satadru on the way to my reading there, I was remembering what a muse this bridge was for me—a near obsession—during my three Bombay Blues writing years. And as thrilling and almost addictively turbulent as that had felt then, this time it was a lovely feeling to have a smooth (mentally, emotionally) sail across the waters.

I spoke to Satadru about this. In a way, I was feeling a kind of pressure, however self-imposed, to grieve the loss of the city I’d written about. And he smiled and said, But it’s not gone. You have put that piece of you on the page, the pages, and they are still there, but now they are out in the world. That part of you is out in the world…

He said just what I needed to hear. And what I knew deep down, or not so deep down, as well.

This idea that when you let go, nothing is lost. Rather, you make room for new avatars and incarnations of a place. Of people.

Funny being you here.

And so it came to be, is coming to be. A new mother/fatherland map is forming, layering, renewing the old, the olds. A most wonderful thing during this last trip was precisely this:

She revealed another layer to me—one resonating with new friends, new tunes.

And new tales. For, truth be told, I could still sense that muse, feigning sleep, reigning dreams, somewhere on the premises.

So we shall see about that.